What is Robotic surgery?

Robotic surgery is a type of minimally invasive surgery where by the instruments used to perform the operation are controlled by a set of robotic arms. These robotic arms are controlled by the surgeon who sits at a control console. This allows for a greater range of movement at the tips of the instruments compared to traditional laparoscopic surgery.

What is the Da Vinci robot?

The Da Vinci robot is the first commercially available platform that has been used to perform robotic surgery. The company that makes this system, Intuitive surgery named the system after Leonardo da Vinci.

How does the Da Vinci robot work? 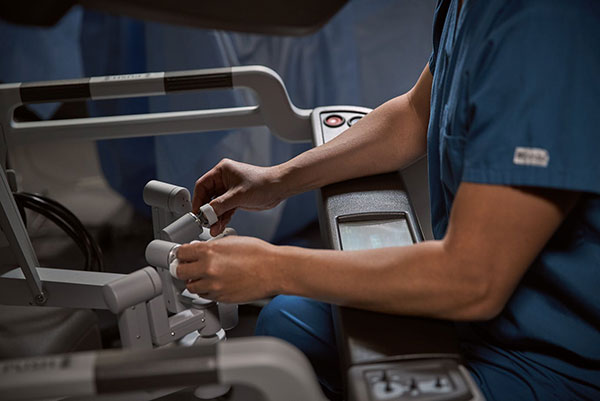 The system has three components, the surgeons console at which the surgeon works, the vision console which has a screen and the laparoscopy equipment and the patient cart which has four arms attached to a boom to perform the surgery.

How does robotic surgery compare to laparoscopic surgery?

The da Vinci System has been designed to improve upon conventional Key hole surgery in which the surgeon operates while standing, using hand-held, long-shafted instruments, without wrist movement. In addition, the surgeon can operate the surgical camera without an assistant and take advantage of a magnified 3D image. The da Vinci System's design allows the surgeon to operate from a comfortable ‘stress free’ seated position at the console, with eyes and hands positioned in line with the instruments and using controls at the console to move the instruments and camera.

What is the advantage of robotic surgery?

For the patient, a da Vinci procedure can offer all the potential benefits of a minimally invasive procedure, including less pain, less blood loss and less need for blood transfusions

For some procedures robotic surgery can enable a short hospital stay, a quick recovery and fast return to normal daily activities

What procedures can be performed with robotic surgery?

In general and upper gastrointestinal surgery, the da Vinci System has been successfully used in the following procedures:

In addition, the da Vinci system is widely used for

What are the risks of robotic surgery?

The risks of surgery using the robotic surgical system are like conventional laparoscopy and should be discussed with your doctor.

Surgery using the da Vinci robotic surgical system may be associated with longer operative and anaesthesia times. As with any surgical device, there is also the risk that the da Vinci robotic surgical system could malfunction or fail leading to serious injury or the need to switch to another type of surgical approach. Switching to another surgical approach could also result in a longer procedure time, a longer time under anaesthesia and increased complications.

How much does robotic surgery cost? What are the out of pocket costs?

With the widespread increase in costs, robotic surgery is now more affordable than ever and for some procedures may be equivalent in cost to open or laparoscopic surgery.

However, the out of pocket costs of robotic surgery will depend on several factors which include

Most major health funds cover the cost of robotic surgery, please check with your individual insurer and your specific policy.

What should I do if I am interested in Robotic surgery?

Dr Gandy is very happy to discuss the options for robotic surgery, whether this type of procure is right for you and any costs involved. As with all procedures, Dr Gandy’s team will provide you with written estimated costs prior to admission to hospital